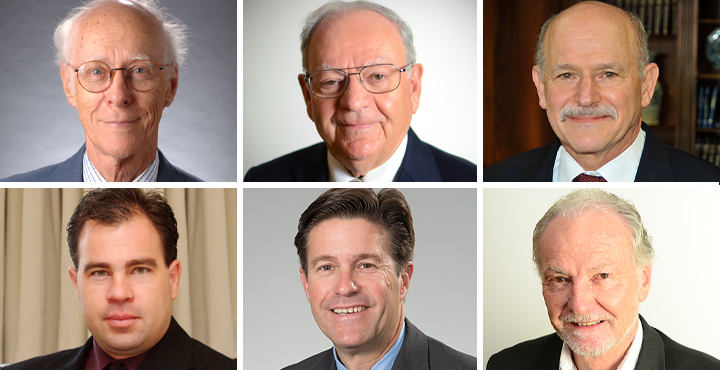 BATON ROUGE, Louisiana – Five Pennington Biomedical Research Center faculty members and one adjunct professor rank among the most cited researchers in the world, according to the Google Scholar Citations database.

The database shows 4,730 scholars have an h-index above 100. The h-index is a gauge of productivity and the impact of published papers. The index takes into account the researcher’s total number of papers and how many times each was cited by other scholars. An h-index over 100 means that at least 100 of the scholar’s papers have been cited more than 100 times.

When a paper is frequently cited, it indicates that other scientists are using those results to test and prove new theories, which provide fresh discoveries. This process is how research serves as the basis for continuously advancing science and improving health.

Here are a few ways these researchers have changed our health for the better:

Claude Bouchard, Ph.D., Professor and Director, Human Genomics Laboratory, John W. Barton, Sr. Endowed Chair in Genetics and Nutrition, and LSU Boyd Professor, had the highest h-index at 187 as of Jan. 7, according to Google Scholar Citations. His research centers on the genetics and consequences of obesity and the health benefits of exercise. His papers have been cited 167,183 times. Dr. Bouchard co-authored a paper published in the Journal of the American Medical Association in 1995 titled “Physical Activity and Public Health: A Recommendation from the Centers for Disease Control and Prevention and the American College of Sports Medicine,” which has been cited more than 11,000 times.

“Although the health benefits of vigorous, endurance exercise were well-known at the time, we also knew only a small percentage of people could work out that hard,” Dr. Bouchard said. “To encourage more people to become active, we emphasized the body of research supporting a recommendation for exercising at a lower level of intensity. The health gains were generally smaller, but the overall benefit was far better than the alternative of remaining physically inactive.”

Steven Heymsfield, M.D., Professor and Director, Metabolism and Body Composition Laboratory, has an h-index of 164. His papers have been cited 119,251 times.  His paper “Epidemiology of sarcopenia among the elderly in New Mexico,” which described how muscle mass decreases with age, has been cited more than 4,200 times. Dr. Heymsfield said that when the paper was published in 1998, he had no idea that sarcopenia would become one of the hottest topics in clinical research. But it took years before the paper, one of the first to define body mass index, and the term BMI became popular.

George Bray, M.D., LSU Boyd Professor Emeritus and the Research Center's first Executive Director, has an h-index of 147. His papers have been cited 117,416 times. His most highly cited paper, “A Simple Efficient Liquid Scintillator for Counting Aqueous Solutions in a Liquid Scintillation Counter,” was published in 1960 by the journal Analytical Biochemistry. The paper has been cited nearly 10,000 times.  Another paper, “Effects on blood pressure of reduced dietary sodium and the Dietary Approaches to Stop Hypertension (DASH) diet,” has been cited more than 6,100 times.

Eric Ravussin, Ph.D., Director, Nutrition Obesity Research Center; Douglas L. Gordon Chair in Diabetes and Metabolism; Boyd Professor; and Associate Executive Director for Clinical Science, has an h-index of 143. His papers have been cited 75,244 times. His paper “Leptin levels in human and rodent: measurement of plasma leptin and ob RNA in obese and weight-reduced subjects,” published in Nature medicine, has been cited more than 4,600 times.  Another paper, “Circulating ghrelin levels are decreased in huma obesity,” has been cited more than 2,800 times.

Peter Katzmarzyk, Ph.D., Associate Executive Director for Population and Public Health Sciences, and Professor and Marie Edana Corcoran Endowed Chair in Pediatric Obesity and Diabetes has an h-index of 128. His papers have been cited 74,009 times. His paper, “Effect of Physical Inactivity on Major Non-Communicable Diseases Worldwide: An Analysis of Burden of Disease and Life Expectancy,” published in 2012 by the journal Lancet, has been cited more than 8,000 times. One of Dr. Katzmarzyk’s most recent papers, which was published in the New England Journal of Medicine, showed a tailored weight-loss program could help those most at risk of obesity: underserved, low-income patients.

Carl “Chip” Lavie, M.D., adjunct professor at LSU and Pennington, and Professor of Medicine at the John Ochsner Heart and Vascular Institute, Ochsner Clinical School, the University of Queensland School of Medicine in New Orleans, has an h-index of 129. His papers have been cited more 123,712 times. Lavie’s research focuses on exercise, physical activity and fitness, obesity and the obesity paradox, cardiac rehab and many other areas of Preventive Cardiology. Among his most highly cited papers are “Effectiveness-based Guidelines for the Prevention of Cardiovascular Diseases in Women - 2011 Update: A Guideline of the American Heart Association” published in 2011 JACC, and “Obesity and Cardiovascular Disease: Risk Factor, Paradox, and Impact of Weight Loss” in the 2009 JACC, which were cited more than 2,600 and 2,200 times, respectively.

“Our scientists and their research have built Pennington Biomedical into a global leader in nutrition and obesity research,” said Pennington Biomedical Executive Director John Kirwan, PhD. “We are immensely proud of their contributions. Their work has advanced the fields of physical activity, nutrition, metabolism, and obesity research, and the health of so many in our state and across the world.”

For the complete list of highly cited scholars with an h-index over 100, go to https://www.webometrics.info/en/hlargerthan100.

About the Pennington Biomedical Research Center
The Pennington Biomedical Research Center is at the forefront of medical discovery as it relates to understanding the triggers of obesity, diabetes, cardiovascular disease, cancer and dementia.  The Center architected the “Obecity, USA” awareness and advocacy campaign to help solve the obesity epidemic by 2040.  The Center conducts basic, clinical, and population research, and is affiliated with Louisiana State University.  The research enterprise at Pennington Biomedical includes over 480 employees within a network of 40 clinics and research laboratories, and 13 highly specialized core service facilities. Its scientists and physician/scientists are supported by research trainees, lab technicians, nurses, dietitians, and other support personnel.  Pennington Biomedical is located in state-of-the-art research facilities on a 222-acre campus in Baton Rouge, Louisiana.  For more information, see https://www.pbrc.edu.