Baton Rouge, LA – LSU’s Pennington Biomedical Research Center and the LSU Health Sciences Center (LSUHSC) in New Orleans joined today to present C. Ronald Kahn, MD with an honorary Doctorate of Medicine Honoris Causa at LSUHSC’s 141st Commencement. At ceremonies this morning in New Orleans, Kahn was honored for his extraordinary scientific achievements in diabetes and obesity research. He is one of the world’s leading diabetes scientists and served as chair of Pennington Biomedical’s 2014 external advisory board. 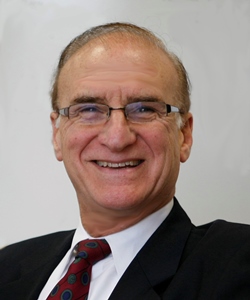 “Dr. Kahn is a world leader on the cutting edge of research in a field that is so vital to the health of Louisianians. It is an honor to have him as a part of our advisory team at Pennington Biomedical, and I cannot think of a better recipient to receive this honorary degree,” said William T. Cefalu, MD, executive director of Pennington Biomedical. “Over the course of his more than 40 year commitment to the field of diabetes and obesity research, Dr. Kahn has repeatedly transformed the way we think about the causes and management of the disease – specifically, insulin action and metabolic control.”

He is currently serving as the Mary L. Iacocca Professor of Medicine at Harvard Medical School and the Chief Academic Officer of the Joslin Diabetes Center. He is a recognized expert in diabetes and obesity research and has published more than 600 peer reviewed scientific papers and 200 reviews and chapters, which have been cited more than 68,000 times in the world scientific literature – making him one of the most-cited scientists and "most highly influential scientists and scholars” as identified by The Scientist. Additionally, he has received more than 70 awards and honors, including the highest honors of the American Diabetes Association, U.S. and British Endocrine Societies, and the Juvenile Diabetes Research Foundation.

Most recently, Kahn was named the first recipient of the Manpei Suzuki International Prize for Diabetes, a prize which recognizes a single individual as the leading researcher in the field of diabetes worldwide. He has trained more than 150 fellows and doctoral students, many of whom are now leading researchers and academicians at institutions throughout the world. His career is a superb illustration of scientific excellence and he has significantly advanced our understanding of insulin signal transduction and mechanisms of altered signaling in diabetes and metabolic disease.

Pennington Biomedical is a recognized leader in the field of diabetes and obesity research. They have been involved in the development of all approved obesity medications on the market today, as well as key diabetes medications.