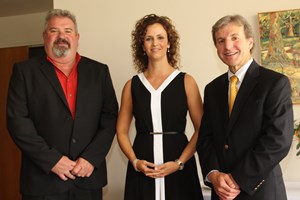 (L to R) - Drs. Mynatt, Stewart and Cefalu
The following honors were bestowed in ceremonies at Pennington Biomedical on September 9, 2015:

"Endowed faculty chairs and professorships help us recruit and retain the highest-quality faculty," said Carol Dreher, president and CEO of Pennington Biomedical Research Foundation. "These endowed positions help us recognize the continued contributions of outstanding faculty and they also provide valuable resources for research that help in a number of ways. For example, funds from the endowment can propel the scientist's research or create opportunities for collaboration with scholars around the world. Pennington Biomedical must be positioned to take every advantage to grow and advance biomedical knowledge. These funds help us do that."

Additional details on the newly named chair and professorships can be found below.

George A. Bray, Jr. Super Chair in Nutrition: Dr. William T. Cefalu has been named to the George A. Bray, Jr. Super Chair in Nutrition. Dr. Cefalu's work is focused on interdisciplinary approaches to metabolic research with particular interest in evaluating insulin resistance and nutritional interventions both in the lab and in our population. Such interventions have been evaluated to enhance clinical care for individuals with obesity and diabetes, and included novel insulin delivery systems and nutritional approaches such as caloric restriction, trace minerals and natural products. He and his team created the NIH-Funded Center for the Study of Botanicals and Metabolic Syndrome to examine the role of natural plant extracts as a therapeutic benefit for obesity and type 2 diabetes. Dr. Cefalu also serves as principal investigator for the NIH-funded Louisiana Clinical and Translational Science Center (LA CaTS), a multi-institutional translational research initiative that represents a unified, comprehensive approach for targeting prevention, care and research of chronic diseases in the underserved population.

The Pennington Medical Foundation, created by C.B. "Doc" and Irene Pennington through an Act of Donation in Trust, funded this super chair with the intent to support the activities of the executive director of Pennington Biomedical Research Center. The chair was created at the time that Pennington Biomedical's first executive director, Dr. George A. Bray, Jr., announced his intention to step down. The Pennington Medical Foundation established this endowed chair in Dr. Bray's name to honor and recognize his exceptional leadership and distinguished service during his tenure. This chair was initially created in 1998 and formally established with matching funds provided by the Louisiana Board of Regents in 1999.

Douglas L. Manship, Sr. Endowed Professorship in Diabetes: Dr. Randall Mynatt has been appointed to the Douglas L. Manship, Sr. Endowed Professorship in Diabetes. His career in the field of diabetes and obesity has been primarily focused on lipid metabolism and insulin resistance. Specifically, his research group studies the way fat is stored and used in the body which could lead to the development of new treatments for obesity-related conditions such as pre-diabetes and diabetes. As director of the Transgenics Core at Pennington Biomedical, Dr. Mynatt and his team have produced models of obesity and diabetes for LSU faculty as well as national and international researchers. These models help with the critical unanswered question of how an obeseogenic environment affects normal metabolism at the whole body level and pave the way for clinical advances.

The Douglas L. Manship, Sr. Endowed Professorship in Diabetes was created with a gift from Douglas L. Manship Sr. who, prior to his death in 1999, served as editor and publisher of the Capital City Press. Dr. Claude Bouchard, executive director of the Pennington Biomedical Research Center, in later recognition of this gift stated, "Mr. Manship was committed to many community organizations, and we were honored to be included among them with this important gift." This professorship supports a scientist whose work is concentrated on the widespread problem of diabetes, which greatly affects the Louisiana population. This professorship was initially created in 1992 and formally established with matching funds provided by the Louisiana Board of Regents that same year.

Dudley and Beverly Coates Endowed Professorship: Dr. Tiffany M. Stewart has been appointed to the Dudley and Beverly Coates Endowed Professorship. She leads a research program that targets eating disorders, body image, and obesity, with a focus on the assessment, treatment, and prevention of these issues that impact our health and performance. With the dawn of e-health technologies, Dr. Stewart has been a pioneer in the development and testing of e-health and community-based programs in order to disseminate prevention and treatment efforts to large populations. Dr. Stewart has spearheaded unique, multi-site prevention and treatment studies that have included the development and deployment of novel programs and technologies for health behavior change for female athletes, U.S. Army Soldiers, and military families. Dr. Stewart is dedicated to translational research: taking health behavior change programs and technologies from bench to bedside.