The manuscript detailing these data, authored in part by two Pennington Biomedical researchers Dr. Frank Greenway and Dr. Candida Rebello, was selected as Editor's Choice and published in the February issue of Obesity. 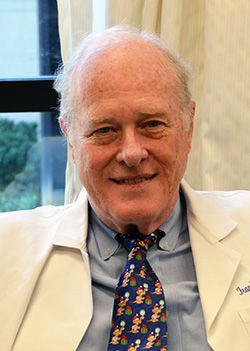 Food cravings refer to a motivational state in which an individual has an intense desire to eat a specific food. While any food will satisfy a person's hunger cue, those two criteria – the intensity of desire and the specificity of taste – distinguish cravings from regular food choices.

"Cravings are an important predictor of eating behavior and weight outcomes as individuals face the challenge of attempting to restrain their eating," Rebello said.

In an environment where there is no shortage of desirable foods, Rebello said it is important that anti-obesity interventions target the behaviors behind eating, particularly the reward component, or the "feel-good effect" of eating palatable foods.

This latest article looks at an exploratory endpoint, the prevalence of food cravings during the treatment period, from a Phase IV pilot safety study. The 12-week, randomized, double-blind, parallel-group, pilot safety study investigated the effects of lorcaserin alone (once daily) and in combination with two different doses of phentermine (lorcaserin twice daily plus phentermine once and twice daily), as an accessory to a calorie-restricted diet. The study evaluated 235 non-diabetic patients with obesity or overweight with one or more weight-related comorbidities (e.g., hypertension, dyslipidemia, sleep apnea) at 12 sites in the United States from October 2013 to September 2014. The primary endpoint was the prevalence of serotonin-related adverse events in the three groups, and the secondary endpoint was weight loss and adverse events. The results of the primary and secondary endpoints have already been published.

Each study participant was given a Food Craving Inventory (FCI) and a Control of Eating Questionnaire (COEQ) before, twice during, and after the study. The FCI asks about specific cravings over the last 30 days, categorized as high-fat foods, sweets, carbohydrates/starches and fast-food fats. The COEQ asks more general questions about cravings, such as the frequency and intensity of cravings, as well as the difficulty in resisting them.

In 235 overweight or obese individuals, those receiving the combinations rather than lorcaserin alone saw the greatest reduction of food cravings after 12 weeks. Lorcaserin is not approved for use in combination with phentermine. Limitations of this analysis include the lack of a control group and the possibility of craving reduction in the lorcaserin group stemming from caloric restriction. Overall limitations from the study include a sample size that was not sufficient to assess major serious adverse events (SAEs), a study duration not long enough to assess long-term tolerability and safety, as well as the study not being powered to assess rare AEs or AEs of special interest.

Lorcaserin HCl (Belviq®) CIV is approved by the U.S. Food and Drug Administration as an adjunct to a calorie-restricted diet and increased physical activity for long-term treatment of obesity or overweight in the presence of at least one weight-related comorbid condition, such as Type 2 diabetes, dyslipidemia or hypertension. The most common side effects of lorcaserin are headache, dizziness, fatigue, nausea, dry mouth and constipation for non-diabetic patients, and hypoglycemia, headache, back pain, cough and fatigue for diabetic patients. It is important to note that the safety and efficacy of lorcaserin in combination with other products intended for weight-loss (like phentermine), over-the-counter drugs, and herbal preparations, have not been established. Additionally, the effect on cardiovascular morbidity and mortality has also not been established.

If food cravings resulted from limiting calories, eating less would increase those cravings. But participants showed reduced cravings despite limiting their calories.

"These preliminary data suggest that the notion that food cravings are a body's response to some other need, like an energy deficiency, is losing ground," Rebello said. "It is clear that there is a range of both biological and emotional processes that trigger food cravings."

Research on appetite and cravings related to chronic disease is a growing scientific area, one in which Rebello will continue to work.

Experiences for cravings can differ based on age, culture, gender, and other lifestyle differences. Triggers for cravings are essentially endless and can include the sight and smell of food, hormonal changes, stress, emotions, and more.

Because most people are more likely to indulge in their cravings, Rebello said more intervention trials that address cravings may be helpful to individuals who find themselves in a battle to curb overeating.

Funding notice: The study, titled "A Multicenter, Double-blind, Randomized, Parallel-group, Pilot Study of 12-week Duration to assess the Short-term Safety and Tolerability of Lorcaserin Plus Two Doses of Immediate-Release Phentermine-HCl Compared with Lorcaserin Alone in Overweight and Obese Adults," was funded by Eisai Inc. The study was conducted at 12 sites in the U.S. between October 2013 and September 2014. Eisai Inc. provided certain edits to this article.