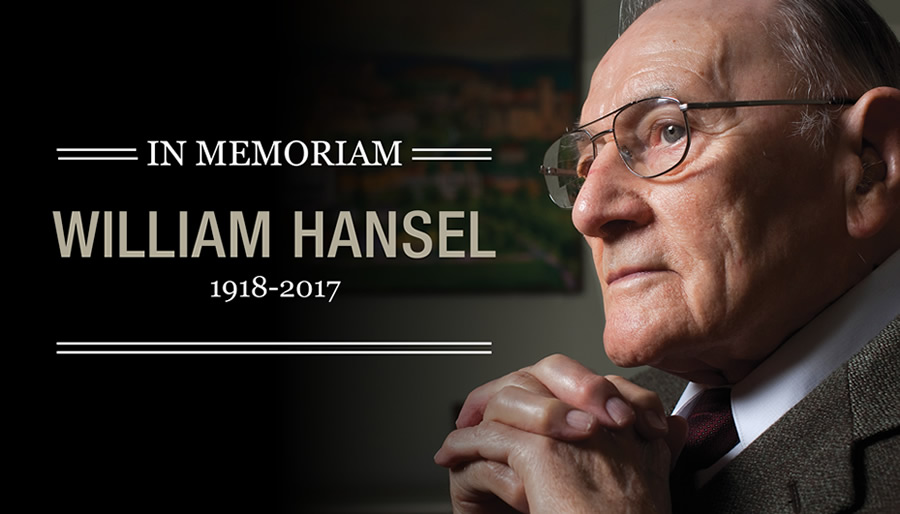 Dr. William Hansel spent nearly 70 years working as a scientist and health research pioneer, building a legacy of dedication and discovery. After a remarkable scientific career that will forever leave its mark on the face of cancer and chronic disease research, Hansel passed away at his home on January 2.

While most people begin dreaming of retirement decades earlier - not Hansel. Ever devoted to his craft - even at 98 years old - Hansel kept regular work hours daily well into December 2016. Hansel shared in 2015 that he had no plans of ever retiring.

"The truth is I would never be very happy in retirement. I can't hit a golf ball straight and I detest the card game bridge so what's there left to do? Go back to work and do something you enjoy!" Hansel said with a chuckle in 2015.

Hansel's storied scientific career came after five and a half years of service in the Army during World War II. After suffering from frozen feet and a brief hospital stint, Hansel defied his doctors' orders and insisted he return to the battlefront, where he fought in General Patton's Ghost Corps during the Battle of the Bulge.

"The boat I was in was hit and sank just as we arrived to the shore," Hansel said, noting that he sustained shrapnel wounds in 17 different places. Hansel was later awarded two Purple Hearts.

"Of my accomplishments, from a lifetime standpoint, I'm proudest of dashing through the Rhine River," Hansel said.

After World War II ended, Hansel returned to the states to begin his collegiate career at Cornell University. He joined the faculty as an animal and reproductive biologist in 1949 and spent the next 40 years as an esteemed scientist, serving as chairman of the Physiology Department and as a revered Liberty Hyde Bailey Professor.

Although he could have retired altogether after 40 years at Cornell, Hansel - who never considered retirement an option - made his way to Louisiana State University as a Gordon Cain Professor in 1990, where he continued his research in reproductive biology. Four short years later, Hansel became one of Pennington Biomedical Research Center's first scientists, but his research focus would soon change. After his wife, Milbrey, received a diagnosis of ovarian cancer in 1995, Hansel immediately shifted his research focus to finding a breakthrough treatment for cancer.

"When I talked to her clinician, he said 'We need people like you to develop better drugs for cancer.' A short time later, I was in Poland at a conference and I heard a talk on the distribution of receptors for a pituitary hormone in cancer. And I realized at that moment we had the potential answer at Pennington Biomedical. The idea of putting drugs together - one to target the cell and another to kill it - I dashed home and started working on it!" Hansel said.

Over the next several decades, Hansel and his lab worked to develop a new class of cancer drugs that target and destroy both primary tumors and metastases. One of those medications designed to fight ovarian, breast and prostate cancer is now in Phase II clinical trials at MD Anderson Cancer Center and is showing significant promise.

Over the years, Hansel's work won him 15 national and international awards for his scientific achievements. His work was published hundreds of times in academic journals. His work ethic and go get 'em attitude earned him a host of admiring colleagues, including the many young scientists whom Hansel mentored. His sense of humor and kindness garnered him countless friends, although the curiosity that drove his career may be the biggest contributor to Hansel's legacy.

"I was born inquisitive and always getting into things I shouldn't have - sometimes they were dangerous," Hansel said with a laugh in 2015. "I've always had an inquiring mind. How do thinks work? Why do they work? I hope my legacy will be the discovery of better drugs which are more targeted and more effective. I hope I've helped a little."

Throughout his career, Hansel was keenly devoted to scholarship and fostering continued learning. In 2008, Pennington Biomedical renamed its regular visiting speaker series in Hansel's honor. Hansel's family has asked that in lieu of flowers, donations be made to Pennington Biomedical Research Foundation to continue the William Hansel Visiting Scientist Speaker Series.